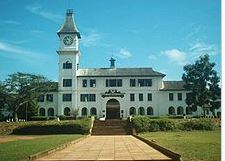 When I started Form 1 in September of 1985, I was excited about the new beginnings and yet somewhat apprehensive. We were so new, so naive and saw all students in Form 2 and above as so mature and wise. There was talk of the new headmaster, Robert Asiedu, a.k.a. “Bob Say” which was really a short form of “Bob Satan”. Needless to say, I had no clue what the origin of this name was. I could only wonder what one would have to be like to earn such a nickname. Afterall he was also just beginning his tenure as headmaster so it couldn’t be because of some occurrences in the school in the last years.

Bob Say was the successor of Mr. A. A. Dadey, who had served as headmaster the last three years. My mother (Clementine Dakoa Obese-Jecty) had once mentioned that we were somewhat related but I never understood the connection. I also never met Mr. Dadey personally. One would hear his name every now and again and I would think back then “we have a connection” but exactly what it was, I did not know.

Fast forward 34 years to 2019 and we are going through this interesting reunification of the cousins on my mothers side. My older brother (Albert Kwasi Bese Obese-Jecty) is able to dig out these notes from my grandfather. It has so much information in it. So now I am trying to understand the family better. It is through this that I get to understand my relation to Mr. A. A. Dadey. Things take on a new meaning. He is no longer just a former headmaster of Achimota School, he was married to my auntie (name & link). Effectively he was my uncle.