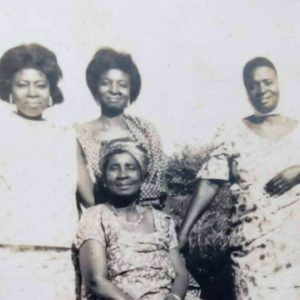 The Rev. H. L. Anang, also known as Osofo Apau, was born in Apirede, Akwapim in 1868. The exact date of birth is not known.

He was trained at Akropong Senior School during the times of Revs. Hillemann and Willm Rothmann who were German missionaries stationed at the time in the then Gold Coast. He then attended the Akropong Seminary in the time of Revs. Willm Rothmann, Belsas Groh Lehmann where he trained as a teacher. Upon completion of this training, he was appointed in January 1893 from Akropong Seminary to Kwanyarko, Agona Fante District as Headteacher of the Junior School there.

In September 1896, at the age of 28, he got married to Sophia Anima Anang (nee ?) in the chapel at Adukrom, consecrated by the Rev. Ph. Kwabi. Sadly, she died on July 23, 1921 while they were stationed in Kwanyako (where he had been first posted after his training in 1893).

On February 24, 1918, he was ordained as a Reverend Minister at Apirede by the Revs. P. Hall, N. Clerk, N. Asare and James Afari by the order of the Home Committee. Rev. H.L. Anang was the first Ghanaian Presbyterian Minister to be ordained by native Ministers after the foreign Ministers had left the country during the First World War.

The reverend got engaged to  Mama Rosa Oparebea on September 14, 1922  They got married on December’s 14, 1922 at the Boso Basel Mission Chapel.

Some of the stations where Rev. H.L. Anang had the priviledge to serve include Kwanyarko, Bobikuma, Mangoase, Amanokrom, Aseseeso, Larteh, Apirede, Boso, Anum, Berekum and Suhum. You can find a post with more information about these stations here.

After retiring from active service, he settled peacefully in his hometown of Apirede until his death on August 11th, 1952.